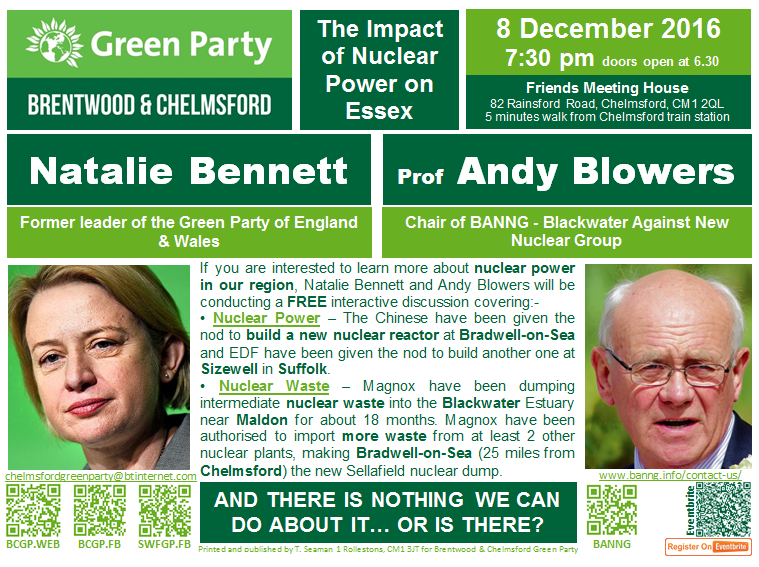 We have a film of the lecture that was given on our Facebook page:

Andy Blowers:     professor with OU; author of The Legacy of Nuclear Power (Routledge)

Only the Green Party and SNP are consistently anti-nuclear.

The evening’s input was to emphasise that there was no need for a nuclear option, no need for Bradwell and that our intended legacy should very carefully considered.

Development of nuclear energy began in the UK post 1945 with the creation of British nuclear weapons.

Construction of Bradwell began in 1957, before nuclear development in the rest of Europe.

Nuclear accidents occurred during 1970/80’s, with Chernobyl the most significant in 1986. Nuclear energy development was then in retreat.

The focus was then on how waste could be dealt with, an issue that united the anti- and pro-nuclear camps.

Bradwell closed in 2002, but submarines with the Trident nuclear weapon system began patrolling  at the end of 1994.

Arguments against the development of nuclear power include:

Bradwell is one of 8 sites being considered. If selected, the estimate for opening is currently 2025. Although those used to having nuclear power provision nearby are sometimes seen as potentially nuclear friendly communities, one survey revealed that 80% of those living in the vicinity of Bradwell were opposed to its re-opening.

Cooling is a problem given the shallow estuary and although some UK jobs would be available during construction, once in operation these would depend on the UK/Chinese relationship.

In considering our legacy:

“Transparency is the best answer to post-truth politics.”

“Politics is something you should do, not be done to.”

Proximity to potential threats often remain unrecognised. Eg Bradwell is close to Southend as the crow flies, while many might just consider the road route which is much longer. While Bradwell is not producing power, there is still potential danger from fuel rods and the waste that is being dumped there.

Periods of austerity can increase stress and reduce people’s headspace to look beyond their own daily needs to focus on issues such as renewable energy.

Costs: tidal sources of energy (eg Swansea Bay) are expensive initially but will be cheaper as economies of scale take over, and Hinkley cost of electricity is anticipated to be twice the current level, with no upper limit established. Whereas the costs of renewable energy reduce over time, those of nuclear increase over time.

Radiation: “an accident anywhere is an accident everywhere”; nuclear provision is fallible: accidents happen; to date there has been a major accident at least once every for each generation; locally, oysters undergo a rigorous treatment process to ensure they are safe.

“Nuclear is an avoidable risk, so let’s avoid it!”

A question was how to get listened to. After 35-40 years of a social democratic consensus, the Brexit and Trump votes suggest a desire to take back control: a reminder of the observation, “The Emperor has no clothes….”

Work following the 2011 nuclear accident in Japan is ongoing. It resulted in 170,00 evacuees and current cost estimates are $200 trillion. Human error can never be ruled out.

Bradwell would depend on Chinese money whereas renewables can be created using local jobs and investment.

Multinationals can be seen as responsible for the commitment to nuclear rather than viewing the issue as the fault of specific countries.

Rallying opposition, such as that for fracking:

Petitions were available in relation to the need for iodine tablets, the need for ECC to exercise its duty of care, the stopping and checking of discharges into the River Blackwater and support for Blackwater against New Nuclear Group. All petitions attracted 40 – 50 signatories and voluntary contributions to cover expenses and support the work of the local party totalled £160.