Following the resignation of a Liberal Democrat Councillor a by election has been called in the Shenfield Ward of Brentwood Borough Council. The election will take place on Thursday 29th October , with polling stations open from 7am to 10pm

The by election is the first opportunity to present the Green Party's message since the 2015 General Election and long time Brentwood resident, John Hamilton, has been selected as the Green Party candidate. 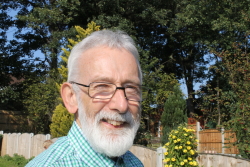 Green voices are needed in every ward and every constituency.  After 26 years in the local area I understand and respect the qualities of Shenfield as a vibrant town in an attractive location.

My work of 40 years in education has prioritised respect for others and the need to work together to change things for the better.

I seek the opportunity to listen to and represent the people of Shenfield, to make the most of what the local area can offer for ourselves and for the future.

Shenfield is under pressure and Green priorities are needed to safeguard and develop the quality of life the residents deserve.

The green belt must be preserved for our health, for our leisure, for agriculture and for the wildlife that can flourish. Homes are urgently needed but brownfield sites can be utilised and neglected areas of the UK developed.

With transport links developing daily, it is vital to speak up for the environment we value but which can so easily be taken for granted. As a Green Party member I would do this.

Nomination papers had to be submitted by 4pm on Friday 2nd October and John was duly nominated by ten local electors and will therefore the Green Party will appear on the ballot paper alongside the Conservatives,Liberal Democrats, Labour and UKIP candidates.